Image copyright Hans Jorgensen Image caption The iconic Copenhagen landmark, the waterfront Cærrum Hymner, hosts concerts It has double arches, a playground underneath, a wedding chapel and a museum dedicated to Hjøtnes, a Viking… 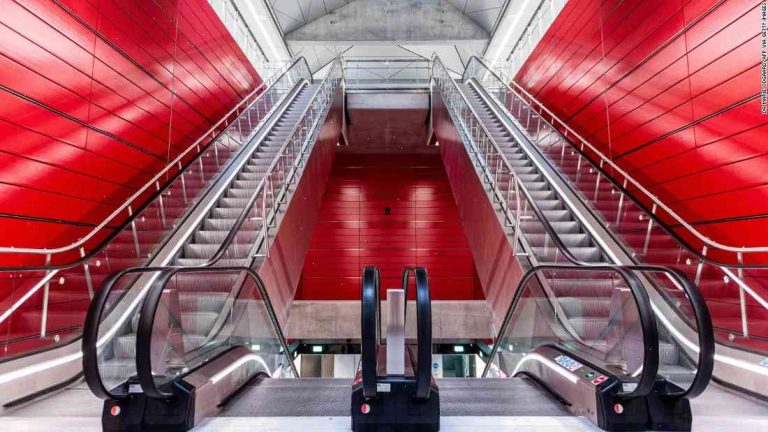 It has double arches, a playground underneath, a wedding chapel and a museum dedicated to Hjøtnes, a Viking god of the sea.

Welcome to the Copenhagen Metro, which launched this week.

The colourful, surprisingly affordable and well-designed metro, costing a total of 112 billion Danish kroner (£12.4bn; $16.9bn), has created some exciting competition for the regional buses and trains.

It is the city’s latest transport system, the result of a decade-long effort by civic and private sector organisations.

The main beneficiaries are residents, who have been invited to finance the ambitious project, set to run until 2030.

Copenhagen obviously has many lively parts of the city, but overall it seems to be largely a place of bland, frequently expensive, transport.

Image copyright Hans Jorgensen Image caption You can buy beer, bacon, fags and even chips on the Metro

Gaining an extra lift through the city centre is an exciting prospect for Londoners.

This could in time threaten the popularity of private buses in London’s underground.

Once you get on it, you realise it is actually not very ambitious at all. There’s no money for routes, not even for new stations.

Predictably, a lot of the stations look like regular bus stops.

And of course it’s not self-driving, like New York’s subway. But it feels underwhelming.

In the car park next to the Cærrum Hymner metro station, I watch passengers booking their ticket for the next train.

But the walk to the station can take an hour.

Some people are hiking around in a park next to the commuter hub; some take pictures by benches.

The joke is that you can buy bacon, fags and chips all with one fare, although it seems obvious you cannot do this at the Metro station.

Numerous commuters stop by just to inquire about the new transport system.

A similar sense of curiosity permeates the city centre, where passers-by stare out at the Metro.

But its success has been driven by commuter demand rather than the government.

The Copenhagen Times has called the new transport system “universal” and “no expense spared”.

I happened to be at the Copenhagen metro station on Wednesday while the train was arriving and the engineers were opening the doors.

The train almost hit the twin arches of the landmark Cærrum Hymner in front of the station.

It is a remarkable sight, and also rather terrifying. That’s Danish for pain.

Attendees of the Copenhagen city council are celebrating now that they know how to fit the metro to the city.

But I’d say that this showy new transport system has a long way to go before it is ready to judge on its merits.

(The article has been amended to clarify that in more European countries metro systems are only required to have certain stops.)

Can’t call it sexist to make the effort to cover women in politics?